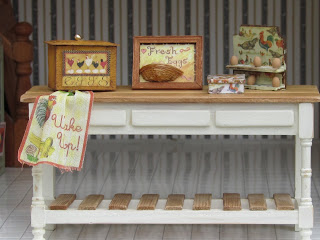 They do say that as you get older time goes by more quickly ... remember when you were wee and the time from one Christmas to the next just seemed like forever ... no more !!
I'm so looking forward to going to Paris next weekend because I'll see my son's lovely girlfriend for the first time in 6 months, I'll be in a beautiful city and I'll be going back to S.I.M.P.
This time last year Kris had been training in Paris for almost two years and I'd just happened to time a visit with the most fantastic Miniatures Fair. He is now back training in the UK down in Bath (beautiful Dollshouse Shop there too!) but Catty is still in Paris working so they may end up living there in future ... who knows?? Anyway I just cant believe it's a year since S.I.M.P. but I'm even more ashamed to say my purchases are still not out in situ, I'm sooo bad at completing things :)
For the past couple of years I've been making and gathering things for 'Home to Roost' which is my chicken house and early 2010 I'd asked Sylvia if she could make me one of her shabby jugs with a chicken on it .... of course she did a lovely one so I asked if she could make me more things. There followed quite a lengthy conversation on the subject with us both coming up with more and more ideas. It culminated in us meeting up at S.I.M.P. and she gave me a box of fantastic goodies - back in the flat we were all admiring them. 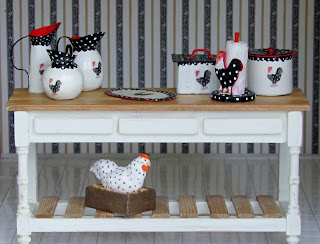 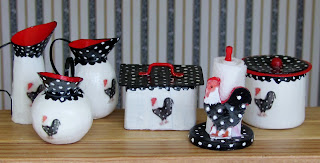 I was just blown away at the Fair and must confess to spending lots of Euros but I just don't get that opportunity often. I was also lucky enough to get one of Rosanna's amazing tea cosies, her work is unbelievable and I'm hoping she'll have a chicken cushion this year??


Not from Paris but because so many of you love Kat's Hats ... how adorable is this? The sack of eggs was an extra gift. 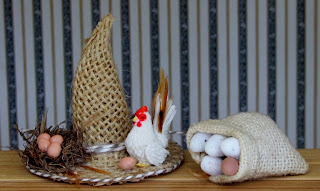 Of course more & more of my cannisters ready for the kitchen 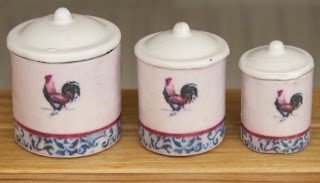 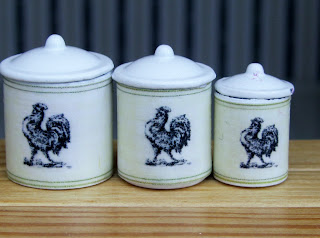 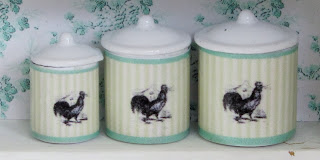 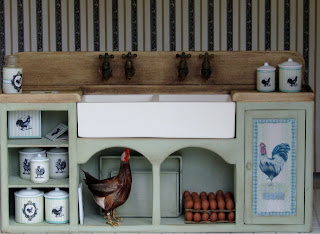 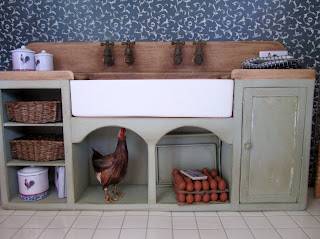 Jackie
Edinburgh, United Kingdom
Hi, my name is Jackie. I live in the beautiful city of Edinburgh, and am very proud to be Scottish. I have a daughter and 2 sons all grown up now and am happiest when they are all here together which happens maybe twice a year. I stumbled on this absorbing miniatures hobby when I was totally mesmerised by Titania's Palace in Legoland and came home from that holiday with my first dollshouse bought in a supermarket in Horsens, Denmark. It was 1/16th scale and like many people I was so proud of my efforts to furnish it! I have dipped in and out of the hobby for over 20 years and now find it a wonderful way to escape the less pleasant aspects of modern life! How things have changed in 20 years .... I now have around 10 houses, most being renovated or in design phase!! I have so many ideas and so little time. I have loved reading other blogs and hope that this will enable me to share my hobby with like minded folks.